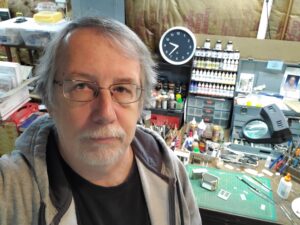 I had model trains as a child, and then returned to them when my son was interested in trains. I built a sizable layout in my basement in the ’90s that modeled the Western Maryland Railway and joined our local model railroad club, the Rockville Model Railroad Society, later becoming the secretary and then president of it. I found my modeling passion was primarily in building structures, and have been doing that for the last decade, usually for other layouts, making test builds for a few manufacturers, or just to put on my overcrowded shelves.

Greg can be emailed at Greg Cassidy.

Greg’s other contributions to the New Tracks Modeling site

Clark Kooning, HLM, MMR, 225 Clark has been active in model railroading since he was 5 years old like many starting out with Lionel train, he got for a birthday present. After going thru school Read more…

I model primarily in HO scale for the past 27 years though I’ve done some N, O and G. My main enjoyment is structures and dioramas. I like trying new techniques and sharing with Read more…

Welcome to Your Modeling Mentors. Definition of a Mentor:  A Trusted Counselor or Guide If you follow the builds from our mentors and take notes on their comments during their builds, you will learn their modeling skills Read more…